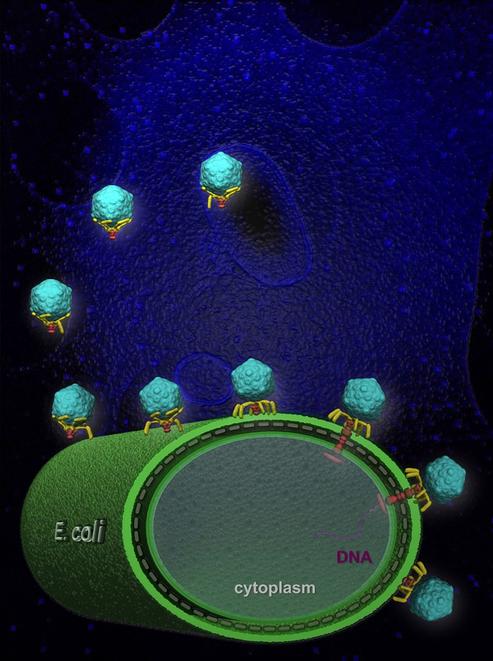 The envelope glycoproteins (Envs) of HIV/SIV mediate binding to CD4 and co-receptors on target cells to initiate viral entry and infection. The Envs comprise the functional trimeric spikes on the surface of the viral membrane and is composed of glycoprotein (gp41) and a surface glycoprotein (gp120). Cryo-ET was utilized to determine the molecular architecture of native HIV-1 gp120 trimers on the envelope of virions [Liu et al. 2008 Nature]. For the first time, we were able to demonstrate the structural and conformational changes that occur upon the binding of the Env spikes of HIV to its host cell surface receptor (CD4) at 2.0nm resolution. The binding of Env to CD4 results in a major reorganization of the Env trimer and a close contact between the virus and target cell co-receptor, thus facilitating viral entry.

Bacteriophages direct the evolution of bacterial pathogenicity by imposing selection for resistance to infection and by horizontal gene transfer of host genes to new bacteria. Most phages utilize elaborate tail machines to eject their genome into a host cell. In addition, these highly sophisticated molecular machines are responsible for host-cell recognition, attachment, and cell envelope penetration. Understanding how tailed phages infect their bacterial hosts will not only provide insight into the evolution of bacterial pathogenicity, but will also illuminate basic biological problems such as molecular recognition, protein-protein, protein-DNA, protein-membrane interactions, and the transport of large macromolecules across cell membranes.

This project is supported by NIH/NIGMS.